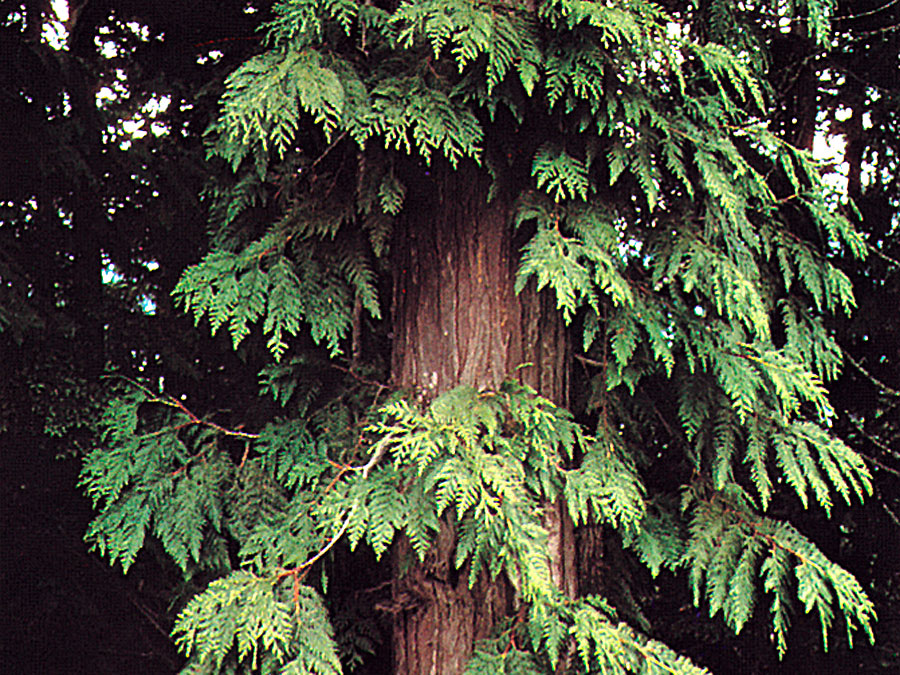 Once upon a time, there was a crafty Wood Wizard who built a beautiful chest of drawers made out of cedar. His Beloved Wife rubbed a bit of fragrant cedarwood oil inside the drawer boxes. Later, to bless the project, they burned some California incense-cedar to send their prayers to the spirit world.

Would you believe that each of the three times I mentioned the word “cedar” I was referring to three distinctly different trees?

One at a time

The cedar used for the chest of drawers was our local Thuja plicata, most commonly known as Western Red Cedar and also called Giant Arborvitae (“tree of life”). The wood for the project came from trees on our land here in northern Idaho.

The red cedarwood oil we used to anoint the dresser was an essential oil whose source was Juniperus virginiana, which is commonly known as Eastern redcedar, Carolina cedar, Virginia cedar, pencil cedar, red juniper, and Aromatic Cedar. A tree sometimes called American Arborvitae or white cedar, Thuja occidentalis, is the source for yet another essential oil. There is yet another oil called Atlas Cedar, Cedrus atlantica, and this is closely related to the Cedar of Lebanon, C. libani, inspiration to beloved author of The Prophet, Kahlil Gibran.

The aromatic California incense cedar is botanically known as Calocedrus (“false cedar”) decurrens (a reference as to how the base of the leaves gradually merge with the stem). At one time, botanists gave this tree the genus name Libocedrus, but genetic differences discovered in the early 20th century among Pacific Rim specimens led to a name change to reflect this observation.

Be it known that no “true” cedars – genus Cedrus – are native to North America. True cedars are native to the eastern Mediterranean, northern Africa, and the Himalayas. True cedars have needle-like leaves, similar in appearance to a Larix, also known as larch or tamarack, even though the larch looses its needles in the fall (a deciduous conifer). True cedar is quite dissimilar to my local Thuja cedar with their scale-like leaves.

Are you kidding me?

To make matters more confusing, the widespread Rocky Mountain juniper, Juniperus scopulorum, is sometimes called Rocky Mountain red cedar because of it’s strong resemblance to it cousin in the east, J. virginiana. Then there are it’s other cousins, J. communsis, or common juniper, and the locally regional (local to me at least) J. occidentalis, or western juniper, which mostly hangs out with sagebrush (a whole ‘nother story!) and the stately Ponderosa Pine. There is even a tree known as Alaska cedar, Chamaecyparis nootkatensis, sometimes called Nootka false cypress, yellow cedar, and Alaska yellow cedar, which restricts itself to the northern Pacific coastal areas.

Make up your mind, would you please?

Some herb crafters sell smudge bundles that often contain cedar and sage. Now, the sage could be of the genus Artemisia, or it could be Salvia, to which our common garden sage belongs (think turkey stuffing). However, since many smudge bundles come from the American southwest, the cedar is likely to be one of the many species of juniper, at least six of which grow in New Mexico. Because neither plants nor animals asknowledge aribitrary human boundaries, it is possible that said bundle could actually be a juniper and sagebrush (Artemisia) bundle. Nevertheless, people will continue to call juniper “cedar” and arborvitae “cedar”, while calling the false cedar and the false cypress, both, cedar as well.

Aside from burning the leaf as a blessing smoke, cedar has been used in other ways as medicine. Some Native Americans used Thuja as a tea for headache, and the leafy branches were simply moistened, warmed, and laid to the forehead… I really like this idea. Native women were also known to use the tea of the inner bark to promote menstruation. As for the junipers, Native people of the Missouri River region used the leaves and berries as a decoction for colds and coughs, and sometimes inhaled the smoke from it for the same purpose.

Note: NEVER use essential oil of cedar or juniper internally as they are extremely toxic; do not use these essential oils externally unless properly diluted in a carrier oil.

One of the best ways to use cedar of any type is to craft soaps, candles, potpourri, insect repellent, salve, ointment and incense from the leaves and/or essential oils (the oil will be sufficiently diluted for these purposes), as the aroma is quite wonderful, and is also useful as an antiseptic. You can make an easy cedar salve by gently simmering the cut-up leaves in olive oil until rich and fragrant, then adding beeswax to harden.

Cedar is a Tone Wood

Alaska yellow cedar is very popular for making Native-American Style hoop drums. The wood is skillfully bent into a round frame, then a piece of wet rawhide is stretched across it to make a drum head that you strike with a beater. The diameter and depth of the frame determine the tone of the drum, as does the thickness and type of dried rawhide skin. In addition to furniture, the Wood Wizard (aka My Husband) also built a guitar with Western red cedar for the top of the body (the sides are Big Leaf maple, Acer macrophyllum). He found the wood out in the creek after winter washed a large stump down from the mountains, left over from a logging operation many years ago. I am very fortunate that my partner the Wizard is skilled in the ways of wood, and can turn what looked like a washed-up hunk of rip-rap into an enduring musical instrument.

If you like to burn incense or smudge for sacred or even practical reasons, the cedars and junipers, by whatever name you call them, can be a first choice. Use the smoke to consecrate your work and your self with a universal tradition older than memory, facilitating the creation of good energy here and now.

The preceding article is revised and adapted from my book, The Wild & Weedy Apothecary, by Llewellyn Publications. 2010.