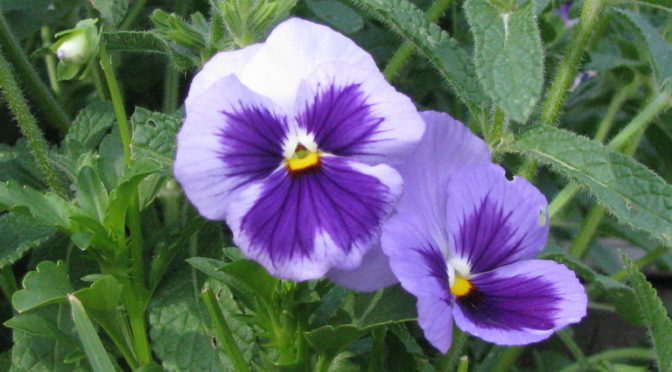 … or, “Gramma, why are there flowers in the salad?”

Yes, indeed, there are flowers in the salad. Many folks are surprised to see even the common violet or nasturtium in their green, leafy salad, but people have been eating flowers for centuries. In dayes of olde, some flowers were pounded with sugar and eaten to dispel unseemly humours, while some flowers have been fermented into delightful alcoholic beverages – another way to improve one’s humor. There are also some flowers that should never be consumed, which I will get to later.

While not often used in cooking, the flower petals of Monarda, often called Bergamot or Bee Balm, add a spicy, minty, almost oregano-like flavor to salads, and they also make a snappy cup of tea, useful for coughs and lung congestion.

To make a simple herb-flower tea, boil 1 pint water, remove from heat. Place 1 teaspoon fresh or 1/2 teaspoon dried flowers into a teapot or other suitable vessel,  pour the hot water over the herb, then cover and steep from 5 to 10 minutes; strain and serve, using honey to sweeten if desired. Do not give honey to babies under one year old.

Flowers from kitchen garden herbs make an attractive edible garnish. This includes the azure-blue flowers of the Borage plant, whose leaves have an aroma and taste reminiscent of cucumber. Flowering herb stems can also be used to make herbal vinegars. Flowering Basil immediately comes to mind, especially the purple types because they will tint the vinegar a beautiful pinkish-purple and taste wonderful.

A fun summer project using edible flowers is to take your favorite combination of flowering herbs – thyme and marjoram, for example – and tie a few sprigs together with kitchen string, and hang them to dry for use later in soups and stews. Put these miniature bouquets into a wide-mouthed glass jar for easy retrieval. They also make useful gifts. You can even string together several of them on a length of jute or twine and make a rustic garland to decorate your kitchen.

Basic Herbal Syrup – In a small saucepan, boil 1 quart water with 2 ounces dried or 4 ounces fresh plant material; turn down the heat and simmer uncovered until reduced by half, leaving 1 pint, about 20 minutes. Strain, then add 1/2 cup honey, stirring until blended. If using sugar, use 1 cup sugar and, when adding to the strained herbal decoction, return to medium heat just until dissolved. Decant the syrup into a super-clean bottle, label and date. The syrup should be refrigerated and will keep about 3 months.

Another not-so-common flower in the kitchen is the romantic Rose. There are dozens of ways to eat a rose, from the silky petals to the voluptuous hips.

Rose Petal Honey – Gently press 1 pint clean rose petals into the bottom of a saucepan. Pour room-temperature mild honey into the pan to cover the petals, about 2 cups honey, possibly more, and slowly heat over low until the honey is just warm, a few minutes only; too much heat destroys the healthful enzymes. Put this sticky mixture into a clean jar and close tightly. Store at room temperature for about 2 weeks to allow the rose flavor and fragrance to permeate the honey. Reheat honey again over low heat by placing the jar in a small pan of water (like a double boiler); after it softens, strain out the petals and recap immediately. You could also start over again and make a batch of double-infused honey for more flavor. If you have the time and inclination, you could heat the honey in its jar in the warm sun for these procedures.

You can also eat the petals of the delicate Gem Marigolds (of the common garden-variety marigold), and these have a citrusy aroma and flavor such as lemon or tangerine. You can take the petals of either the gem marigolds or calendula and toss them into pancakes, muffins, or even birthday cakes. I have seen wedding cakes decorated with calendula petals and even the white petals from daisies, much to everyone’s delight. Any of these could be folded into a tub of whipped butter. Just use the petals, as the whole head of any of these would not be palatable.

Dandelion petals also fall into the category of edible flowers, even the unopened flower bud is used as food. I’m thinking a wilted spinach salad with dandelion buds quickly sauteed in a dab of bacon grease and chopped hard-cooked eggs – kind of bitter, but tasty.

Other edible flowers that are more of a by-product of over-mature garden vegetables include radish YUM! and arugula, which I think taste much better than the leaves.

One popular edible flower with bite is the nasturtium. The leaves are edible as well, but personally I prefer the flowers. Not only are they tasty torn up into a salad or floating blissfully on the sea of a cool summer soup, they can also be dried and used in winter soups too. In fact, the nasturtium, which is native to Peru, contains a natural antibiotic and enhances the immune system. They also fall into the next category of edible flowers.

Another edible flower suitable for stuffing, which must be cooked before eating, is the squash blossom, especially from summer squash. Be sure to take the male flowers on the long stems and not the female flowers on the swollen stems, or you’ll be robbing your plants of all the zucchini. Squash flowers are also delicious torn up into soups and scrambled eggs.

Stuffed Squash Blossoms – Pick the blossoms mid-morning after the dew is dried and before they wilt in the heat of the day; remove any insects that may be inside. Do not wash these flowers, and keep cool until ready to use. Carefully stuff a thin slice or two of jack or mozzarella cheese inside, securing with a toothpick if necessary. Next, lightly dredge in seasoned flour; dip into beaten egg; then dredge again in seasoned breadcrumbs or cornmeal. In a large skillet over medium-high heat, fry the squash blossoms in a bit of oil, turning once, until golden brown.  Sprinkle with a dash of salt, serve immediately and watch them disappear.

Just Because they’re Pretty…   …doesn’t mean they’re edible! Never eat flowers from the florist; they’re all treated with fungicides, insecticides, and other chemicals, rendering them toxic and inedible even if they’re not poisonous flowers.

Under no circumstances should you eat any of the following flowers, no matter if they are wild or domestic. They are noxious, poisonous, toxic, deadly, or worse. Don’t even touch ’em.

There are others, but these are the most common. I would also advise against eating wildflowers (or any other part of the plant) that resemble the dill plant, even though many are edible, since the Umbel family (their flowers look like umbrellas) has some virulently poisonous members in their ranks. So do certain members of the lily family, like the above-mentioned Death Camas, but onions and chives are lilies too, so I guess you can’t judge a whole family on account of one or two members. If you are gathering wild flowers to eat, be sure to make a positive identification first before picking.  If you want to eat garden flowers and aren’t sure which is which, ask at your local nursery or County Extension Master Gardeners for help in identifying the safe from the sorry… Oops! Pulmonary arrest, how inconvenient…