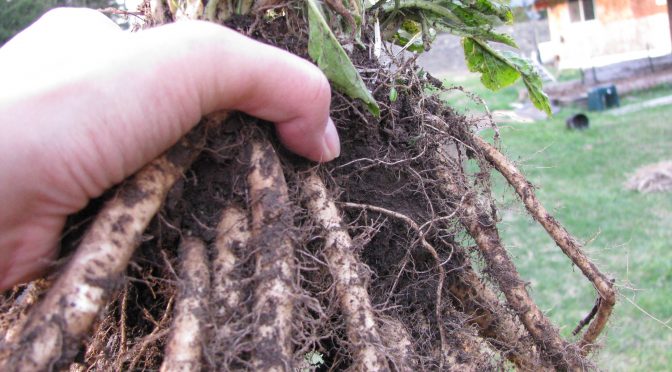 Horseradish was once believed to ward off scorpions!

Horseradish is the rhinoceros of the garden – aggressive yet sweet, earthy yet existential.  Not exactly a featured specimen, horseradish is nevertheless a valuable member of the homestead or yarden on account of its culinary and apothecary uses. Native to southern Europe and western Asia.

Hardy perennial 2-3’ tall and wide, long strappy leaves can be smooth or crinkly, with a tall stalk bearing typical “radish” flowers (remove to send energy to root). Do not feed leaves to livestock (the volatile oils can cause severe stomach inflammation ) ;  instead, use in compost or make into a “tea” to use as a fungicide.

Start horseradish in early spring or late fall, in fertile, well-drained moist silty soil, in full sun. They like a fairly neutral pH.  Plant small pieces of the root 2-3’ apart.  “Big Top Western” and “Common” are two popular varieties, the first one being more resistant to viruses, and having a nice root.

Harvest in early spring or late fall; some folks say the flavor is best after a few frosts. When digging it up, the root pieces that remain readily sprout, so these are the pieces you want to find and use for re-planting. You can also plant in a large container and bury the container in the ground for moisture retention and to keep the root from spreading.

APOTHECARY – Fresh root is the part used. Do not use internally if you have peptic ulcers or kidney disorders, IBS or hypothyroidism.

The sulfur compound called isothiocyanate found in fresh horseradish root offers defense against bacterial infections including Listeria, E. coli and Staphylococcus. The component sinigrin (glucosinate) is an anti-oxidant and immune stimulant, inhibiting the mutation of healthy cells from free-radical damage and boosting the production of white blood cells.

Horseradish is diuretic, it stimulates urination and the flushing of metabolic waste, and useful for UTI’s. The potassium in horseradish helps regulate the passage of fluids between cellular membranes. As a digestive stimulant it encourages peristalsis.

Horseradish is diaphoretic, eating it (or using an herbal extract) opens the pores for sweating. Use a horseradish syrup if you have mucousy cough and bronchitis.

A freshly-grated horseradish sandwich is said to be a remedy for hay fever.

Do not “over-consume” horseradish. It can be very stimulating. However, modest consumption such as 2-3 tablespoons with other food makes a good appetite stimulant and liver tonic.

Horseradish is one of the Five Bitter Herbs used during the Passover Feast (Seder): horseradish, nettles, coriander, horehound, and lettuce/chicory. Great with brisket.

Stir finely grated horseradish into creamy mashed potatoes. In fact, mixing horseradish with a dash of cream or sour cream is a preferred way to serve the vegetable.