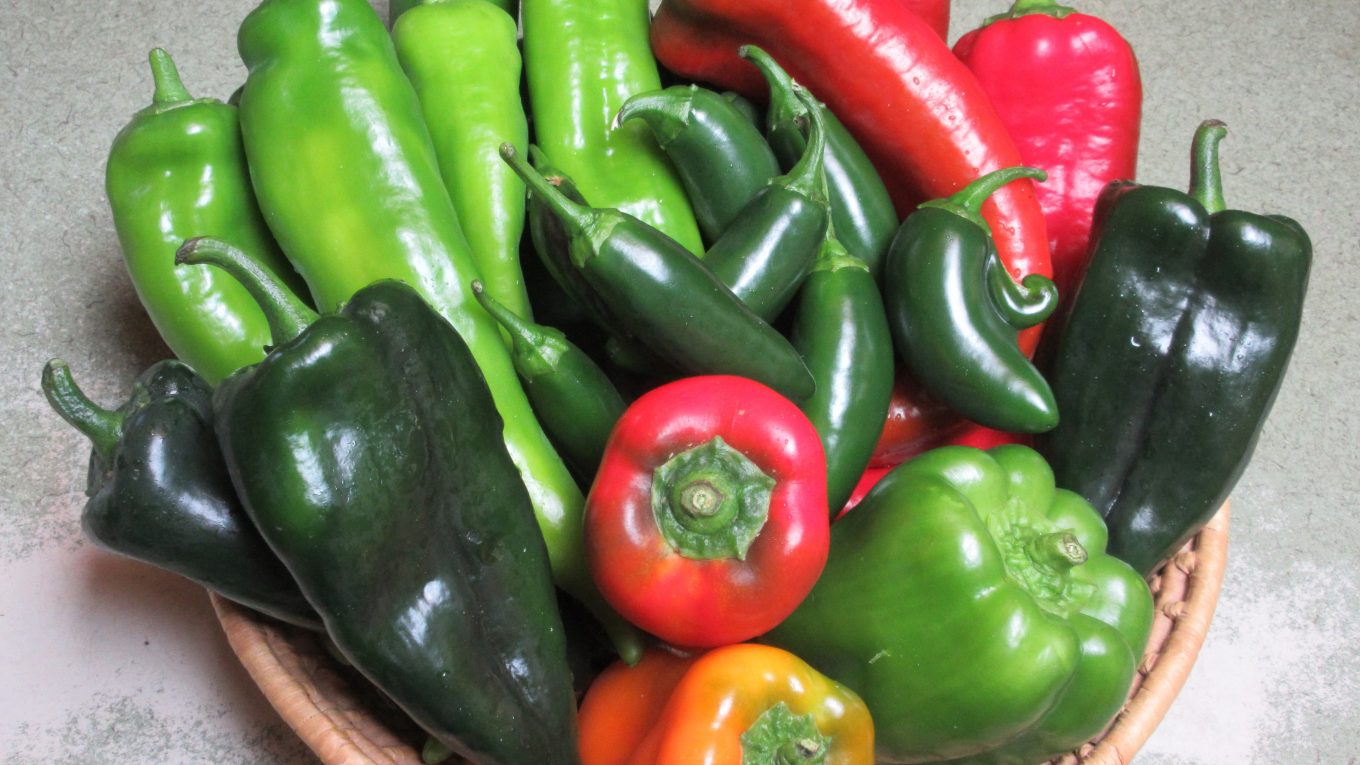 Today… marinated peppers, two kinds. First was Romanian Rainbow belll peppers in an oil-vinegar marinade with oregano, and the second batch was banana peppers and 2 jars of pimiento peppers, with oregano and thyme (oh yeah, and 1 dried hot pepper in the jar with the ‘nanas).
About canning with oil… according to USDA literature (did I mention that I was a certified Master Food Preserver), there are only a couple of recommended recipes for making oil-vinegar marinated vegetables. One type is peppers, another is mushrooms, and the third is 3-bean salad. Here is the recipe I used for the peppers. This recipe assumes you know how to can using a water bath canner.

Marinated Peppers yield: about 9 half-pints
4 lbs. firm peppers (you can use hot or mild, or a mixture of both)
1 cup bottled lemon juice (this is so the acidity is precise)
2 cups white vinegar (actually I used a mixture of white and apple cider vinegar, both)
1 Tbsp. dried oregano
1 cup olive oil or salad oil (I used a mixture of both)
1/2 cup chopped onion
2 cloves garlic, quartered – optional (I chopped it up and added it to the brine)
1 Tbsp. prepared horseradish- optional (I did not use this)
Select your favorite pepper. If you use hot peppers, you might want to wear gloves. Peppers may be left whole, cut in halves, quarters, or however they will fit in the jar. Blister the skin off the hot peppers over a flame or in the broiler, or in the case of mild peppers, blanch 3 minutes after cutting up, and drain.
(To blister, place a wire grate directly over the burner, turn the heat up to high – along with the exhaust fan – and place peppers directly over the flame, turning occasionally until skin blackens all over. Place each pepper into a heat-proof bowl and cover while you do the other peppers. Once they’re all blistered, take a paring knife and gently scrape off the skin. you can leave the stems in if they’re small, otherwise cut them off. Continue with the recipe.)
Now, add 1/4 teaspoon plain sea salt to each half-pint. (This assumes you have prepped your jars, rings, and lids by now, and that you know what you’re doing.) Mix lemon juice, vinegar, oregano, oil, onions, and garlic into a saucepan and bring to a boil. Fill jars with peppers, and add hot, well-mixed oil and vinegar solution over the peppers, leaving 1/2-inch headspace. Adjust lids and process.
0-1000 ft. above sea level — 15 minutes
1001-3000 ft. — 20 minutes
3001-6000 ft. — 20 minutes
Above 6000 ft. — 25 minutes
I have never made these before, so I really don’t know what to expect. However, as with any pickled veggie, I would let this rest at least a month before tasting it so it mellows and the flavors blend nicely.
Okay, so if you don’t know how to can, what should you do? I would go to your county extension agency and pick up all the booklets and recipes you can from them, usually at a nominal cost, then ask them to have a Master Food Preserver give you a call. Perhaps you can get together and have her (or him) show you what to do. It’s a lot of fun. It can also be a lot of tedious work, such as in canning pears, where you have to peel each pear by hand (the apple peeler won’t work on the irregular shaped pears). However, food is worth more than money, and when you see those beautiful jars lined up on your pantry shelf, you will feel very wealthy.
Speaking of pantries, how is yours doing? Are you ready for winter? Are you ready for these strange economic times? Repeat after me: FOOD IS WORTH MORE THAN MONEY, and you’d better believe it.
Well, before I get on too much of a rant, I’d better get back to the kitchen. There are boxes and boxes of blushing tomatoes, green tomatoes, golden tomatoes in the slow-cooker, cayennes drying in a box, and I had to go to town yesterday to buy more jars (which you can use over and over again). I made a wish earlier in the season that I’d fill each canning jar I had (probably about a dozen cases)… well, be careful what you wish for, so the saying goes… We are food-fat, and lovin’ it.
Till next time, Merry Part
Peace, Doreen

One thought on “Still Makin’ Salsa”