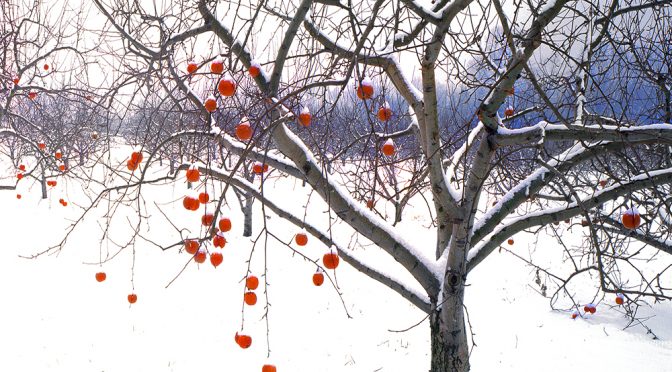 We recently faced the longest night of the year, and spring will be here sooner than we realize! But winter is still heavily upon us, with over two months to go. In the meantime, we can create new traditions out of old ones, which is something that can bring a feeling of satisfaction to our lives. As we connect via invisible airwaves, it is comforting to know we are still nourished by some of the same things that sustained our ancestors. In this case, The Apple. Here is a short excerpt from my book, The Wild & Weedy Apothecary, about the tradition of Wassail – both the verb and the beverage.

The curious custom of Wassail — from the Anglo-Saxon wes hal, meaning “be whole” or to drink “to the health of” — is a midwinter toast to the apple orchard, and possibly dates back to the fifth century; some believe it is a relic held over from Roman sacrifices to Pomona, goddess of fruit. It was certainly practiced in the West Country of England up until very recently, and many neopagans and period-revivalists still do so — and why not? The tradition took place on Twelfth Night, usually around January 5.  A biscuit or cake doused with cider was laid on a tree branch, doused again, and then all the folks who had gathered in the orchard would sing carols or hymns — “Hats full! Caps full! Bushel-bushel-sacks full!” and bang pots and pans together, with the men sometimes shooting their guns into the air, generally making a great noise to ward off uninvited bad spirits and to let the beneficent spirits know where the apple trees were.

The wassail bowl was sometimes passed around and shared as a “loving cup” or was brought door to door to wassail the neighbors and their homes. Sometimes even beehives were wassailed. Proclaiming a toast to those things in life that are vital and necessary, such as food and friends, makes a lot of sense, and we can see that wassail is an activity as well as a food item.

Some recipes for wassail feature baked apples floating around the punch bowl. Most wassail recipes include brandy, stout, or some kind of alcohol, although you could certainly make it without. Here is a recipe for a wassail bowl that takes a little bit of time and fussing, but the results will be fun to share with your fellow revelers.

1 teaspoon each ground ginger and nutmeg

Bake apples at 350-degrees for 20 minutes, set aside. In a large saucepan, place the whole spices, 2 cups of the ale, and the ground spices, and slowly heat for 10 minutes. Strain ale into a bowl, discard spices, and return ale to the pan. Add remaining ale, the sugar, and the sherry or port, heating on low for about  20 minutes; do not boil! In the meantime, beat the egg whites until firm, beat the yolks until creamy, then fold in the whites. Slowly beat the hot ale mixture into the eggs until smooth (you can see why you don’t want it to boil). Carefully pour the hot liquid into a heatproof bowl. Float apples on top. Serve warm in heated mugs. Love and joy come to you,
And to you your wassail too!