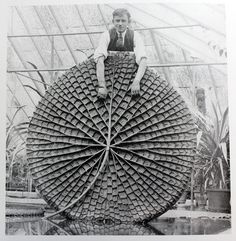 … I love it when you talk botany to me!

No, this is not the name of the Greek comedy team performing at the New Ionian Improv. This is deep… the whole Tracheophyta division is concerned with it, and all ferns and seed-bearing plants are involved.

The original Crystal Palace in London’s Hyde Park was inspired by Joseph Paxton’s experiences with giant Amazonian water lilies. Originally a professional gardener of some renown, he observed that the huge leaves on these lilies were thin and delicate, yet their internal structure was so strong that forest natives could place a small child on the floating lily pad and balance them there while the parents could fish for the day’s food. The leaf would hold the child as long as they didn’t roll around much; one can only guess that after a few generations of this kind of action, the children learned to remain still after watching their cousin fall into the drink and try to climb out. What could explain this anomaly of delicate strength?

Xylem is literally the wood in a tree – and in a water lily. This woody tissue system supports trees and other vascular plants – those plants that contain vessels for circulation of fluids. You can necessarily see these vessels without specialized equipment, but they’re there. The very word xylem derives from the Greek word for “wood”; the tonal percussion instrument called the xylophone derives from the same root word. Xylem is found in the roots of plants as well as the stems and leaves. The “wood” – whether it be of a spruce tree or a water lily – forms water carrying vessels within its own structure. But it doesn’t stand alone.

The phloem, sometimes called the bast, is the food-transporting vessel of the plant, making passages for rising sap. Together, the xylem and phloem for what’s called the vascular bundle, a specialized conductive and supporting tissue structure. It’s a complicated system of sending and receiving. Food is created in the leaves via magic! The process of called photosynthesis literally means the plant is feeding on sunlight. The phloem is the vessel by which this food – proteins, carbohydrates, fats – is transported to the growing parts of, for example, a head of broccoli or an apple tree or even a periwinkle vine. And the xylem is the structure that holds the plant up to absorb sunlight and continue the process of sending and receiving… itself a vessel of sending and receiving. Whit fills in the spaces between the epidermis (bark or skin) and the vascular tissue is called the cortex.

The above examples of spruce tree and water lily requires a bit of side-tracking however. The tree is a bit more specialized, since part of what you see, the outer bark, is not living tissue like the outside of an annual plant. Yes, the tree is very much alive, but the actual growing parts are sandwiched in between the wood itself and the outer bark. In the very center of a mature tree is the pith – thin watery cells that often die off and become spongy or papery; the next layer radiating out is the wood or xylem (transporting water), some of which is heartwood, and some of which is sapwood: this is where you can count the growth rings. Next is the cambium, where cell division occurs; then the phloem, or bast, which transports nutrition; and finally the bark, with it’s own distinct layers slowly being pushed out from within as the tree expands in girth.

I am reminded of the characters called Ents from the Lord of the Rings stories, and their old wisdom, because it takes many decades for a large tree to mature, while a sunflower, which is very sturdy and upright for an annual plant, matures in just a season.

When we harvest a branch from a birch tree to use for herbal medicine, we peel and scrape off the cambium, or what is commonly called the inner bark (and most of the phloem too), the orangey inner fiber and not the outer peeling bark. Additionally, we may also use unpeeled young twigs because they too have plenty of the same type of vascular activity within them. Some might call it “life force”.

Imagine is something like this… water quenches your body through the supportive “xylem” of your bone and muscle tissue, and your arteries carry the “phloem” or blood that nourishes everything, including the xylem. It’s a bit more complicated than that, but this serves as a simple metaphor for the body of a plant. And it’s soul.

The soul of a plant? How can a plant have a soul? Consider the Concord grape, a willow tree, a rare orchid; but dies a plant have “a” soul”? What animates a plant – or anything else for that matter – to grow and exist?

To that end, let us next explore the Journey to the Center of Your Mind, or Meetings with Remarkable Plant Spirits when I post next time. So from the left-brained, from out in left-field…